A blacksmith’s most common response when someone asks, ”Why do you like to forge?” is that forging brings the iron to life.  In this class we will take that very literally and focus on various means of creating forged botanical forms. Students will chose from a variety of forging techniques and approaches such as cut outs, chasing, layering, fold forming… to create botanical elements that then will be worked into a finished piece or arrangement which can then be mounted on a base of metal, stone, or wood.    Students will not only have the opportunity to pursue techniques of particular interest to themselves but also exposure to techniques chosen by other students and will come away with a broader understanding of how to interpret natural forms in the language of forged iron. 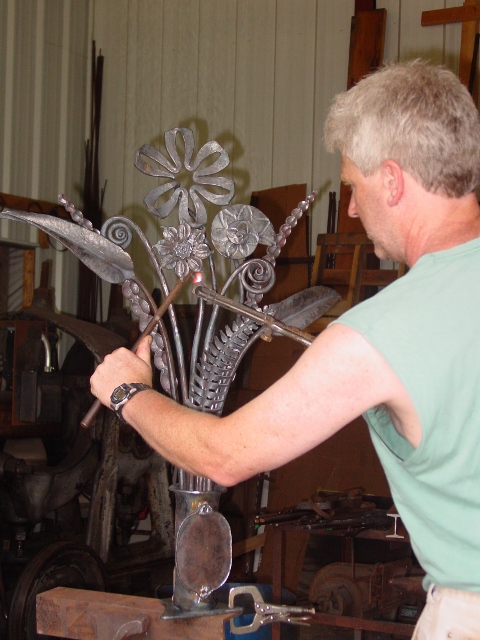 Bob Compton has been blacksmithing professionally since 1983.  In 1989 he opened Rising Sun Forge to pursue custom architectural projects.  Primarily creating work for private homes he has developed a style that brings traditional joinery and forge practice to contemporary design.  Currently in addition to the architectural work he is working on some sculptural pieces that are expressions of the forging medium.  Bob has demonstrated extensively and taught both at blacksmithing schools and from his own studio.